Polycom is a brand associated originally with business conferencing, but much has changed over the last decade. Not only has Polycom made a name for itself with advanced IP endpoints but is also a market leader in the provisioning of open standards based unified communications software.
More recently Polycom announced the acquisition of the headset manufacturer Plantronics which will see the merger of two of the biggest telecommunications equipment providers. 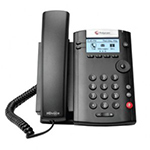 Polycom's VVX range has grown to encompass some SFB ( Skype for Business ) specific models though all are compatible with major Unified Communications platforms.
These models start off with basic SIP phones such as the Polycom VVX201 SFB which is a two line IP phone with HD voice, duplex sound, gigabit transfer speed, web based config and a dedicated RJ9 headsets port.
The OS is accessed via an intuitive interface based on a back lit graphic LCD screen ( monochrome ).
This phone can be viewed as the entry level in the Polycom VVX IP series and the various models that make up the family feature incremental and innovative feature enhancements. 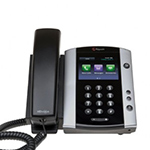 This is evident when we look at the Polycom VVX 500 Media Phone - here we see a similarly designed desktop IP phone which is controlled via a 3.5 inch touch screen display - this will allow access to integrated business features such as shared calendars, contacts, streaming media such as weather, news and stocks.
A webkit based browser allows pretty much full internet access and HD video and audio playback. Although they will behave as high end business desktop phones these additional' experiential' features are why this new breed of telephones are called media phones. 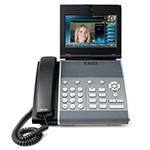 The VVX series culminates ( as of now ) with the Polycom VVX1500 Dual Stack Business Video Phone which unifies video, voice and all applications in an advanced IP / SIP desktop unit.
This allows clear video and voice calling via a 2 megapixel camera and a 7inch TFT LCD display which is set at a comfortable 16*9 aspect ratio.

The Polycom VVX1500D has H.323 support, it connects with all standards-based H.323 video conferencing and telephone systems including the Polycom HDX series and real time media conference platform such as Polycom RealPresence collaboration server.

This entry was posted in Telephone News and tagged Polycom, skype for business, ip phones, UC endpoints on June 25, 2018 by B4S. ← Previous Post Next Post →