Avaya are pioneers in the realm of Unified Communications with their enterprise solution for UC and contact center - the Avaya Aura® Platform provides the platform upon which business can deploy their entire communications infrastructure. This UC solution will allow the transmission of multiple devices over many different media types. Not only do Avaya provide the infrastructure for business communications but also pioneer some of the most advanced endpoints for UC access. The latest range of IP phones from Avaya is the J100 Series of desktop phones. These are not compatible with all Unified Communications systems, but will increase efficiency and productivity when used in conjunction with specific systems.

Here we have a look at the J100 series from Avaya comprising the J129, J139, J169 and the J179 phones, in ascending order of functionality. All phones can be powered by Ethernet ( POE ) and all are compatible with Avaya Aura and Avaya IP Office systems 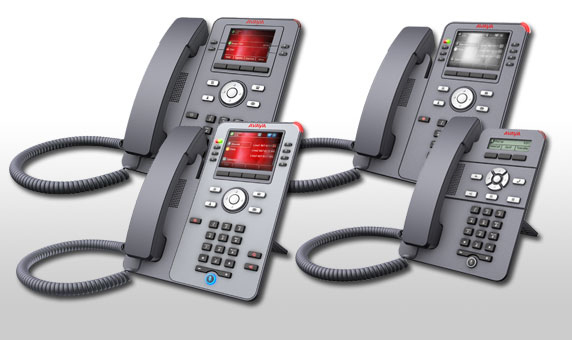 The J129 is the entry level desktop IP phone of the J100 series and, as such, sports a compact monochrome display.
It is a single line IP phone and will only allow POE powering.
The J129 does have a fully duplex speakerphone which gives good call quality as well as two programmable feature keys.
Being a a Proprietary IP it will not work with all phone systems.
View »»

The J139 comes with a larger colour screen and 4 context sensitive ( functions according to the current operation ) soft keys.
It supports multiple incoming IP lines and has dual Gigabit Ethernet ports for high speed data transfer ( better sound quality ) whilst delivering clear and secure voice communications.
The Avaya J139 is aimed at a busy phone user who does not require a massive feature set, rather an efficient and secure telephone ( with speakerphone ).
View »»

The J169 has been conceived as a high performance IP phone.
It has a large ( 7 x 5.3cm ) monochromatic grayscale display which is clear and very legible in a range of lighting conditions.
It is expandable with up to three additional 24 key modules which make this a perfect telephone for phone professionals who not only make a lot of calls but also are required to maintain a quick access to many people.
It supports Wideband sound in both handset and headset. In Avaya's words this is Ideal for: professionals, sales staff, account managers, call centres, knowledge workers etc
.
View »»

Top of the J100 Series range is the Avaya J179.
This incorporates all the features of the J169 model, adding the additional features of supporting a WiFi and Bluetooth module ( the Avaya J100 Wireless module ).
This not only facilitates deployment but also allows the connection of a Bluetooth Headset to the telephone - a popular feature amongst UC users.
This colour screened desktop phone carried an advanced feature set and ships with pre-installed Avaya J100 Series SIP Software
View »»

Whilst these are high end deskphones ( wall mounts are available ) it must be remembered that as proprietary IP Phones they will not work with every phone system.
If you are interested in more information on the Avaya J100 Series then please feel free to contact us here or call us on 0844 824 6664.
If you would like to quickly compare the features of the J100 Series we have created a product comparison matrix here